Chapter XIII, Oh Give Me A Home

This was on the Mayor's mind that night as the police officer who was driving her to her new home on Wilton Drive where she had lived since leaving her husband Donald Vaughan. Discussions with detectives had brought up the possibility that homeless veterans and others were possibly being recruited into paramilitary groups and used to train young fighters. That said, until today no evidence had been found that any such actions were taking place.

As the police officer turned the corner from West Cone Boulevard to Holly Drive he brought the car to a stop, turned on his blue lights and started turning the car back around. "What's going on?" Mayor Vaughan asked looking at the hundreds of people gathered just outside of her house.

"I don't know," the officer replied, "but I'm not taking you in there until we get some back-up." He reached down to turn up the volume on his police radio and heard the news that a giant explosion had completely demolished much of an industrial park just off of Interstate 40 near Sandy Ridge Road. 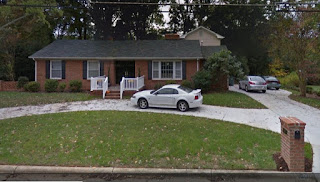 Mayor Vaughan reached to turn on her telephone and it immediately began to ring, "Where are you?" her daughter asked, "Are you okay?"

"I'm fine," Nancy answered, "Do you know what happened?"

"The TV said Purolator Facet blew up," her daughter replied. "Friendly Avenue and I-40 are closed because of all the debris on the road. The building and everything in it are completely gone. There's just a big black spot next to a lake."

"Oh my God," the Mayor cried, "I just had a meeting there today."

"I know," her daughter said, "I was scared to death. All the neighbors and lots of other people are here at the house asking about you, the phone keeps ringing and I don't know what to tell people."

"Tell them I'm right around the corner," Nancy said, "I'll be right home. And pack your things, we're going to go stay in a hotel."

By the time the mayor arrived home a couple more police officers had already arrived on the scene and were asking people to stand clear. The officer pulled into her circular driveway, stopped directly in front of her front door to let her out then waited by the car as other officers escorted her inside the house.

Gate City Bomber is made possible by Wackemall Mining, Manufacturing & Farming... and readers like you.

And by The Adventures of the Vegetable Stalker VegetableStalker.com

When I Were A Motorcycle